Traditionally, there has been no easy method when hanging signs and decor from the ceiling. Hassling with tangled cords, levels, ladders, and lifts makes the process of hanging and changing signs notoriously difficult and time-consuming.

ClikMagnets are small, very powerful, permanent ceiling magnets that naturally resist demagnetization. They firmly and reliably connect to any metal surface with steel content, including drop and open-beam ceilings. However, when it’s time to move the sign, the ClikMagnet detaches with minimal effort.

ClikMagnets are encased in a plastic coating to protect against scratches on the connecting surface, and come in four magnetic pull strengths:

ClikMagnets have proved to be the ideal replacement for conventional ceiling clips, which are unsightly, can damage ceiling tile and are difficult to install. Retailers, grocers, manufacturers, event planners, and more, testify that Clik-Clik ceiling magnets are nifty devices that make a world of difference in the sign hanging process. 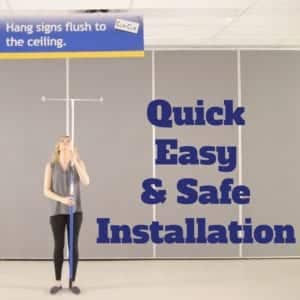 To begin installation, you must first connect LoopLine to both the ClikMagnet and then the sign. Next, place the ClikMagnet with LoopLine attached into the post of the MagMover, which screws on to the end of a MagPole. Extend the pole to position the sign and magnets in a preferential location for the greatest visibility of the ceiling display.

With the Clik-Clik Magnetic Sign Hanging system, you never have to deal with the hassle of getting out and using a ladder or lifts again. Hanging signs has never been this easy.

To learn more about the Clik-Clik Magnetic Hanging System and to get started with ClikMagnets today, browse our online store or contact Ceiling Outfitters at (972) 588-1555.

Since 2007, Ceiling Outfitters® has partnered with over 2,000 organizations and 22,000 stores nationally within the retail, manufacturing, education, and hospitality industries. Ceiling space and storefront windows are optimal visual display locations and we help customers utilize these areas safely, quickly, easily and more economically.

We are the master distributor of the Clik-Clik™ family of products, the premier magnetic hanging system that transforms the ceiling eco-system into a workable location for strategic placement of ceiling signs and displays and helps employees suspend items without a ladder or lifting device.

Upgrade Your Sign Hanging System The traditional sign hanging process is tedious and requires many moving parts. However,…

There are several ways to hang signs and other displays from your ceiling – but they all require the right kind of hardware.…

Products Designed with Retailers in Mind

Implement COVID-19 protective devices in your workplace to ensure the safety of your employees and customers. Our NEW Ready To Hang Sneeze Guard Kits are now available. From this link, you can review our other connecting products that work in retail, restaurants, medical offices, insurance agencies, and other commercial spaces where face-to-face is essential.