Hang signs without a ladder. SIMPLE, SAFE and FAST!

The unique Clik-Clik™ sign hanging solution eliminates the dangers of hanging items from the ceiling while climbing a ladder or riding a lift. A single person can safely install signs or displays in seconds – from the safety of the floor!

#1 – The time and expense of installing ceiling displays & signage

Renting lifts is expensive. Assigning multiple employees to the task is time-consuming and reduces productivity. Hanging displays, décor, or signage never feels like a good return on investment. (Not to mention that drilling holes in the ceiling just to hang a sign looks ugly.)

Hang items efficiently from ceilings with one employee in four SIMPLE steps with the easy-to-use Clik-Clik tools.

Workers in any industry can use the ladderless Clik-Clik system to hang signs and manage ceiling displays while keeping their feet SAFELY on the ground.

#3 – Installing ceiling displays can be slow and frustrating

1) Measure the cord, 2) cut two lengths and tie knots, 3) climb the ladder, 4) realize lengths are uneven and sign is not level, 5) now annoyed, you start over.

Get the job done without a ladder, quickly, and safely

See it in action…

How to Hang Ceiling Signs with Clik-Clik™

Screw a MagMover™ onto the threaded end of a MagPole™

Extend MagPole™ to suspend sign from a metal ceiling surface

Customize a solution to fit your needs. Our Clik-Clik System builder guides you through the process of selecting the right components.

We LOVE Ceiling Outfitters and Their Products

We LOVE Ceiling Outfitters and their products. The American Airlines Honor Team at DFW decorates the gate area in terminal C for different military charity events throughout the year ending with our largest event, The Snowball Express (for the families of our Fallen Heroes: https://www.snowballexpress.org/). Previously, we used fishing line and paper clips to hang snowflakes and other decorations from the ceiling. It would take us days to complete the whole area – but Ceiling Outfitters came to our rescue with the awesome Clik-Clik Magnet system and “LoopLine”. These products saved us several days of work – not to mention the frustration of putting fishing line on paper clips, climbing a ladder and lifting ceiling tiles to tuck the paperclip underneath. The “tear down” day was amazingly easy and we can reuse these for next year! Thank you, Tom, for helping us make Snowball a great success!

The Clik-Clik™ Magnetic System for hanging signs is an easy system to use. I invested in the Starter Kit and became an instant hero with our Maintenance Engineers. Our ME’s don’t have to drive our electric scissor lifts out onto our shop floor to put up new signs. The ME’s can do all of their sign hanging work while standing down at floor level when hanging signs 20 feet above them from the ceiling girders. I am happy, too, since the Clik-Clik white LoopLine™ saves me from getting grief from my company executives. We previously used a small steel loop chain to hang our signs. Dust bunnies would collect on the chain after a period of time. No more dust bunnies and no more company executives complaining that the dust bunnies needed to be cleaned up due to the unacceptable visual appearance. I have recommended the Clik-Clik System to my fellow Managers at our other company locations. I have also given Clik-Clik System information to our sign fabricator, so that they can share this with other companies which they fabricate signs for in our area.

Tom Came To Our Rescue

We LOVE Tom at Ceiling Outfitters and his products. The American Airlines Honor Team at DFW decorates the gate area in terminal C for different military charity events throughout the year ending with our largest event, The Snowball Express (for the families of our Fallen Heroes: https://www.snowballexpress.org/). Previously, we used fishing line and paper clips to hang snowflakes and other decorations from the ceiling. It would take us days to complete the whole area – but Tom came to our rescue with the awesome Clik-Clik Magnet system and “LoopLine”. These products saved us several days of work – not to mention the frustration of putting fishing line on paper clips, climbing a ladder and lifting ceiling tiles to tuck the paperclip underneath. The “tear down” day was amazingly easy and we can reuse these for next year! Thank you Tom for helping us make Snowball a great success!

Clik-Clik™ has helped our stores execute the ceiling sign program for the past 4 years. Ceiling Outfitters® has met all of our customer service needs and promptly filled and delivered our orders.

It Is So Easy To Use

We purchased your starter kit last year (2016) and want you to know that it is the best thing ever! We all love it. It is so easy to use.

We are really enjoying using the pole and magnets around the library. Putting up and taking down the hanging Christmas decorations last year was so easy.

This email is amazing! Not only does it show that you look at individual orders, but that you are willing to go above and beyond to make things right! That isn’t something just any company does, but it shows how committed you are at providing excellent care for your customers. I will be raving about your business to everyone! Well done!

(Putting this testimonial in perspective: Jeremy placed his order on-line for his church and was charged sales tax. We refunded the sales tax and changed the shipping method from FedEx Home Delivery to FedEx Ground Commercial which saved him some additional money).

I love-love-love the Clik-Clik Product

I love-love-love the Clik-Clik product- it’s genius! The only dilemma I have struggled with is the suppliers but I just solved that issue.

Just last Friday I realized I needed to place an order fast and realized the weekend was either going to make it or break my deadline. As I was ordering online, I called them directly to see if they could get my order shipped same day. The gentleman on the phone was so helpful and reassuring, although it was late in the day and they had passed their ‘standard’ cut-off time for shipping, they processed my order immediately and shipped same day. I received my order just in time. Since I am relatively new to the dealership, they had never seen the Clik-Clik product in action. I have never turned so many heads- customers included! These things sell themselves!!

I walked up to the Ceiling Outfitters® booth during the 2017 PROMAT Show, just by chance, and I am glad that I did. The ceiling sign-hanging products provided by Ceiling Outfitters have been very helpful and have had a powerful impact on many of my warehouse layouts and efficiencies.

My warehouses have a more polished wayfinding layout. Additionally, I utilize the Mini-Click Magnets for hanging visual aids for warehouse associates picking product from primary locations.

By far, one of the best investments for organizing a warehouse.

Ceiling signs are part of a valuable strategy for presenting important messages to your customers and employees. However, including ceiling signs in your plans is frequently avoided because hanging them is considered difficult and dangerous.

The ladderless Clik-Clik™ System is magnetic sign hanging hardware that makes the job of hanging or repositioning ceiling signs from any height simple, fast, and safe. A single individual can confidently install ceiling signs and displays in seconds with their feet firmly planted on the floor.

Clik-Clik products are ideal for connecting signs and décor to:

What Are the Components?

Components of the Clik-Clik™ system include:

All the components are reusable and economical. The Clik-Clik system provides the best magnetic sign hanging solution available:

Create the right solution: Our Clik-Clik System Builder guides you through the process of choosing the right components. 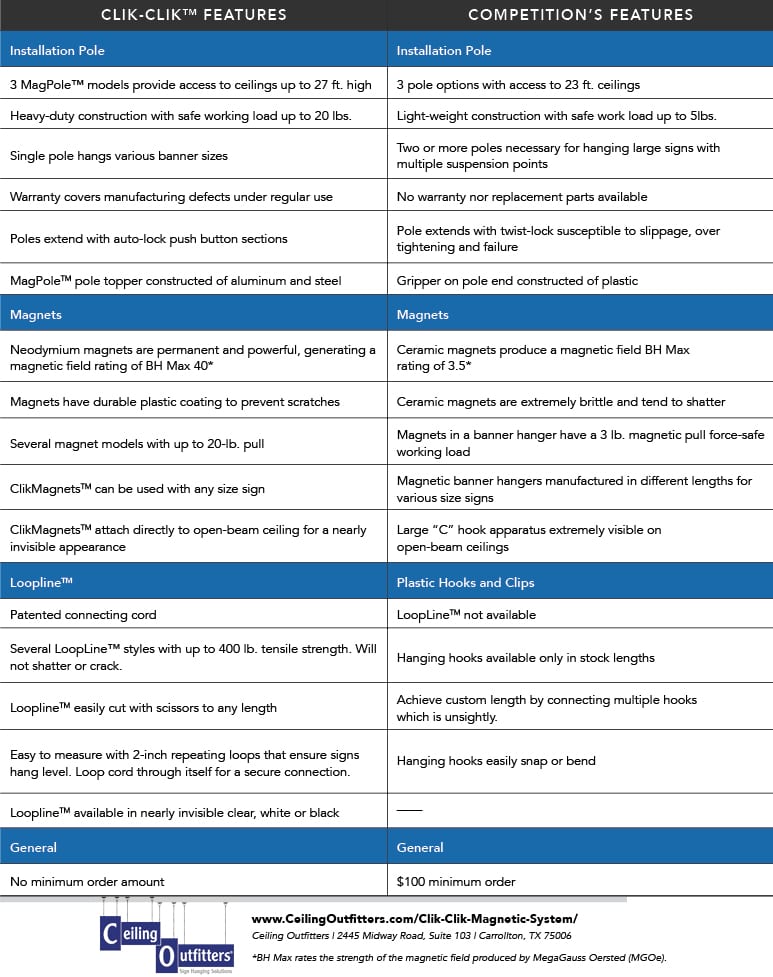 Our assortment of value-priced starter Clik-Kits™ allow you to immediately begin hanging signs, ceiling displays, and décor. We’ve compiled the hardware for you!

For even taller ceilings (higher than 27 feet), use the FlatHat™ system.

Solutions for Ceilings Taller Than 27 Feet

The FlatHat™ accessory allows you to create a signage connection point for taller ceilings which you can reach from the safety of the floor. Bring ceilings taller than 27 feet within reach of the Clik-Clik System’s telescoping installation pole – the MagPole.

Ideal for use in warehouses, larger retailers, wholesale membership stores, factories and more.

Use storefront windows to easily display signs. Since window frames are typically aluminum or wood, the metal frame plate creates a connection point for the Clik-Clik™ System’s ClikMagnets.

Signs always hang level with LoopLine™ cord. Durable, easy-to-connect, and cost-saving, this (nearly) invisible sign hanging cord attaches the sign to the ceiling (connecting the ClikMagnet to the visual display).

The global COVID-19 outbreak is affecting how essential businesses conduct productive and safe operations. During these unprecedented…

My Ceiling Is Too Tall to Reach – Not! If you’re wondering how to measure ceiling height in your facility and not…

Products Designed with Retailers in Mind

Create the right solution: Our System Builder guides you through the process of choosing the right Clik-Clik components.

Implement COVID-19 protective devices in your workplace to ensure the safety of your employees and customers. Our NEW Ready To Hang Sneeze Guard Kits are now available. From this link, you can review our other connecting products that work in retail, restaurants, medical offices, insurance agencies, and other commercial spaces where face-to-face is essential.