One of the many challenges when hanging level signs in retail, grocery or manufacturing environments is having to use traditional sign hanging cords and cable.

Cutting the line “perfectly even” is easy but knotting each line to the sign and ceiling clip at the same location in order to have level signs is the challenge.  Added challenges include working with frayed steel cable and weak barbs attached to the end of string or monofilament. You can take the disaster out of the equation by using the LoopLine™ cord.

LoopLine™ is a revolutionary product that provides an alternative to traditional sign hanging cords. LoopLine effectively:

This guide addresses what makes LoopLine the most effective sign hanging solution, as well as offers insight on how to use, cut, and attach the product to signs and magnetic connectors.

LoopLine is a patented product exclusive to Clik-Clik™ Systems’ distributor, Ceiling Outfitters®, who provides sign hanging solutions, systems and accessories, that work with LoopLine, such as:

LoopLine, is a unique product and works with both the Clik-Clik System and other ceiling connectors, like E-Z™ Metal Ceiling Hooks, twist clips and U-hooks.

LoopLine is offered in four variants:

Learn How To Hang Signs with LoopLine

Insert the first loop on one end of the LoopLine cord through the ClikMagnet ring, open that first loop and thread the opposite end through, creating a cow-hitch. 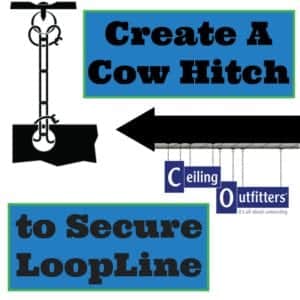 Getting Mathematical to Find LoopLine Length for Slanted Ceilings

To determine the length of LoopLine when hanging on slanted ceilings use the equation:

RISE/RUN x distance between grommets = length to add to one of the lines, in inches.

The difference between these two numbers is the RISE. The 12 inches you moved away from the wall is the RUN. Take the Rise and divide it by the Run, then, multiply that number by the distance between two sign grommets, in inches.

The answer you get is the number of inches you need to add to one of the lines.

Since 2007, Ceiling Outfitters has partnered with over 2,000 organizations and 22,000 stores nationally within the retail, manufacturing, education, and hospitality industries. Ceiling space and storefront windows are optimal visual display locations and we help customers utilize these areas safely, quickly, easily and more economically.

We are the master distributor of the Clik-Clik™ family of product, the premier magnetic hanging system that transforms the ceiling eco-system into a workable location for strategic placement of ceiling signs and displays and helps employees suspend items without a ladder or lifting device.

Why Use Our Essentials Banner Hanging Kit?

Most business owners and managers are a bit puzzled as to how to easily hang a ceiling banner. Hanging a banner that draws…